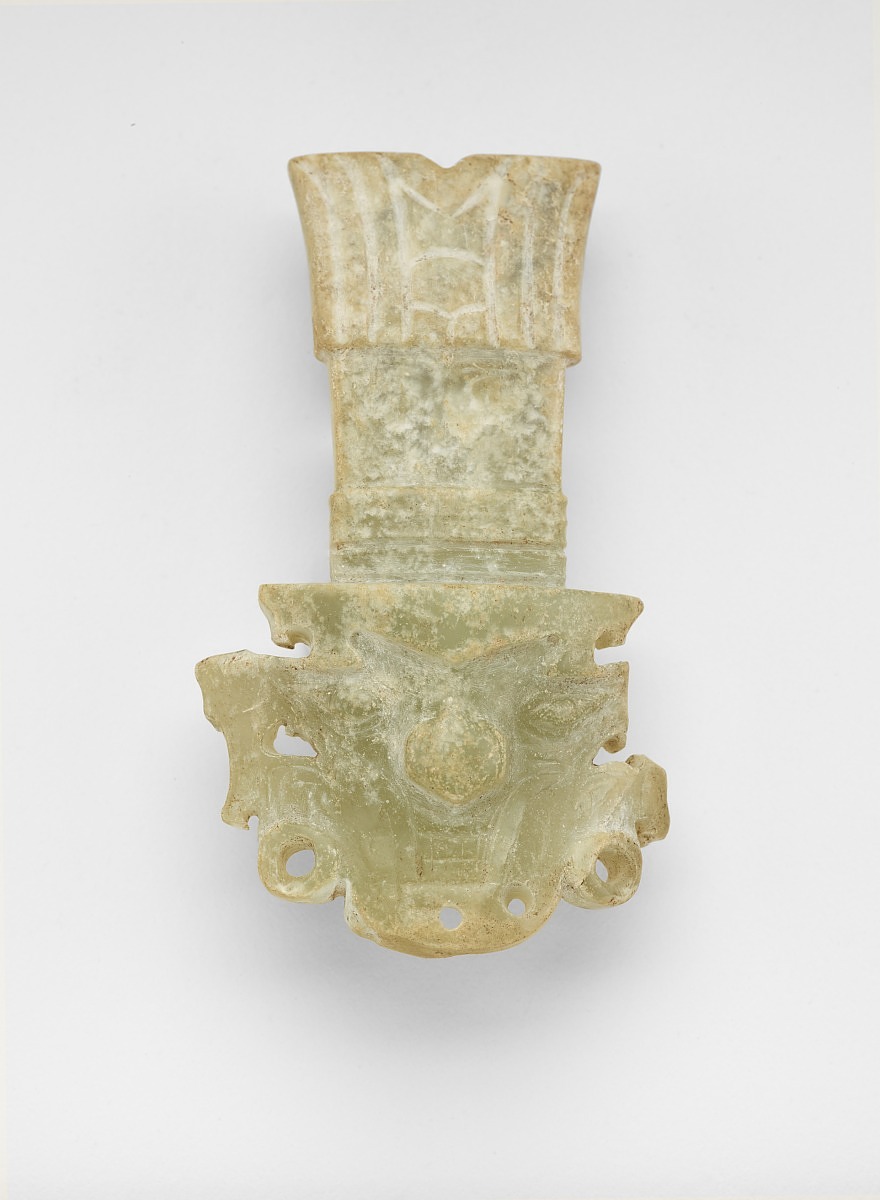 [1] According to information provided by the Arthur M. Sackler Foundation, October 9, 2009.

[3] Pursuant to the agreement between Arthur M. Sackler and the Smithsonian Institution, dated July 28, 1982, legal title of the donated objects was transferred to the Arthur M. Sackler Gallery on September 11, 1987.

Description
The semi-human face has a pronounced bulbous nose in relief; almond-shaped eyes with incised outlines; fangs pointing both up and down; mouth revealing two rows of teeth; tall ornamented headdress; mottled green jade with white marbling; multiple holes at the bottom of the face. (Condition: Roughly carved around back of suspension holes and on left side of mask; slight nicks in edges; traces of calcification.)

The semi-human face is surmounted by an elaborate headdress. Perforations on the jade suggest that it was intended to be attached to another surface, perhaps as an ornament for a shaman's cap.

The slightly convex front of this jade shows a face with a pronounced round nose in relief, slanting almond-shaped eyes, and curved fangs issuing from a set of teeth at the mouth. The flat top of the headdress ends in hooks and dips to a point at the forehead. Above it rises a high ornament with a forked tip and incised lines that suggest feathers. It meets the headdress through a section decorated with a finely incised, symmetrical scroll pattern (now virtually worn away) followed by subtle fluting executed in relief. Circular earrings flank the face. The details of this tall headdress appear--executed with greater finesse on finer material--on a virtually identical head in the Gellatly collection (LTS1985.1.276.1). Additional hooked projections issue above the earrings on both sides; those on the proper left of the face are damaged. Two small holes appear near the bottom; how they function in attachment is unclear. The surfaces are heavily scratched and much altered, and the polish is dull.

Jades like the Sackler's showing these semi-human images form a distinct group from early China that has fascinated Asian and Western scholars alike who published detailed studies and intriguing hypotheses on their meanings. Here, I prefer to point out specific features of the Sackler example that have been overlooked in previous discussions. Its material, heavily scratched and polished to a dull finish, closely resembles its excavated counterpart from Jingmen 荊門, Hubei 湖北 province, depicted without the tall ornamented headdress. [1] The single example from Shijiahe 石家河 provides the key evidence linking these images to the late Neolithic peoples of the middle Yangzi 揚子 valley. The designs on the headdress--the symmetrical scrolled motifs and fluting--associate it with a different group jades, mostly large blades, where they appear alongside an entirely different human image (see F1939.54). This link is not evident on other examples, adding new layers of complexities to an already difficult group of objects.

The archaeological context in which the Shijiahe 石家河 image was found also added interesting new implications to our knowledge of these images. All the Shijiahe 石家河 jades have so far come from burials of infants in large pottery urns instead of traditional graves. [2] Studies of the urn burials at Shijiahe 石家河 indicate that they were used for children or adults who died prematurely or unnaturally, so that it was suggested that the accompanying jades were meant to prevent early deaths and effect abundant procreation. [3] Urn burials were used not just at Shijiahe 石家河, but also extensively at Weichisi 尉遲寺 further downstream in Anhui 安徽 province. [4] No jades were included in the Weichisi 尉遲寺 urn burials, but the urns are marked by the sun-bird emblem seen on the Freer jade bracelet F1917.385. Exactly how the sun-bird motif and the semi-human images of the Shijiahe 石家河 jades relate in their respective burial contexts remains to be understood.

A noteworthy feature, common to many such images in jade, is their cross-sections. The Sackler image is gently curved; the image F1953.9 is worked from a triangular piece curved in the back, as are similar examples in the British Museum and Shanghai Museum. [5] There is no obvious reason to use jades with this cross-section for such faces. A more reasonable explanation might be that they were re-worked from fragments of larger jades, and in view of their distinctive section, perhaps cong 琮 bracelets. Excavated jades from Shijiahe 石家河 contexts are notably modest, even minute, in size, a reflection perhaps of poor mineral resources in the middle Yangzi 揚子 valley. Such conditions would train its people to recognize and value good material when it is available, and certainly use every last scrap if possible. It is important to note that as yet no cong 琮, the Liangzhu 良渚 signature par excellence, has been recovered from Shijiahe 石家河 contexts. Perhaps none was ever made; or none was taken upstream; or those that found their way there were cut up and used for other objects with local meaning. As yet, there is not enough information to properly assess the relationship between these two cultural spheres although scholars have seen such connections (see S1987.514). Available archaeological data from Shijiahe 石家河 indicate that the region was poor in mineral resources and made distinctive types of jades--human and semi-human images, eagles (S1987.930), felines heads (S1987.622), cicadas--in very modest quantities. Yet the modest finds from this region have acted as a powerful magnet for many of the stylistically related but unprovenanced jades in museum collections, raising intriguing questions but not necessarily answering them.

The generally more sculptural form of the above group of jade images, due in part to their unusual cross-sections, provides a reasonable explanation for the late dates of flat, plaque-like versions that have been recovered from Bronze Age contexts, such as the magnificent example from Xin'gan 新干 in Jiangxi 江西 province or from Fengxi 灃西 in Shaanxi 陝西 province. [6] If these images did develop from powerful three-dimensional images to flatly ornate ones, their occurrence in second millennium BCE contexts might indicate that the beliefs that inspired them had lost their spiritual meaning, so that when they show up in early first millennium BCE contexts, they seem out of place, like mere curiosities. [7]

[1] Archaeologists at the Jingmen 荊門 Museum in Hubei 湖北 kindly allowed me to study most of the excavated examples from Shijiahe 石家河 during a visit there in 1993, which resulted in my firsthand knowledge of their size, material, and workmanship. 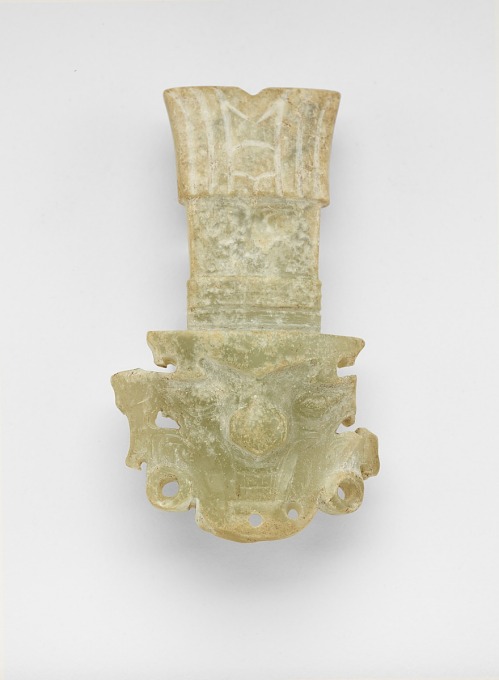