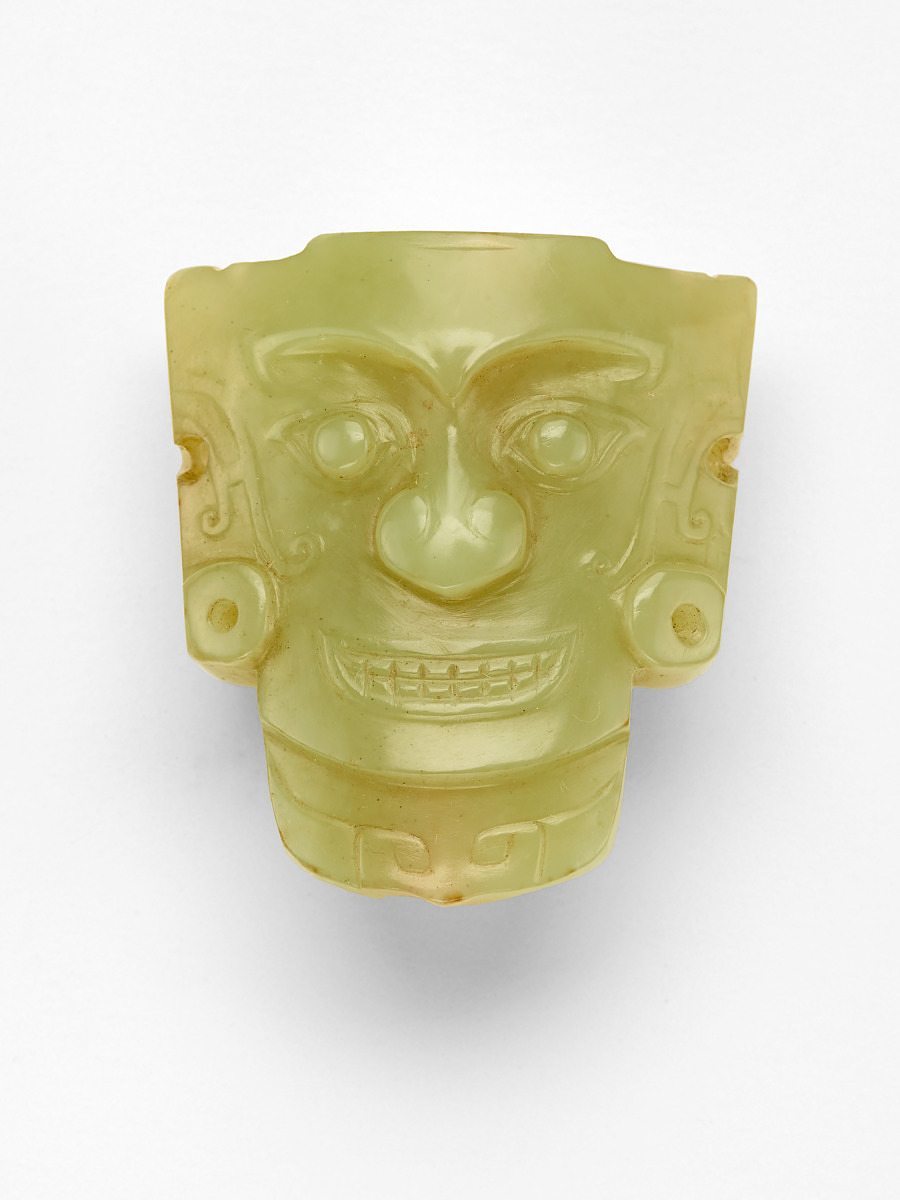 The outstanding feature of this pendant is its bold sculptural quality, resulting in a forceful human image suggestive of superhuman powers. The pendant is perforated down the back; it was probably strung together with other jade ornaments and then sewn onto fabric.

These three late Neolithic jades continue the Liangzhu 良渚 practice of distinguishing special objects by decorating them with masks that sometimes include human features. Unlike earlier examples, however, the motifs on the chisel (F1915.87) and appliqué (F1939.54) are executed in very fine relief lines that define contours as well as interior details. This decorative approach required extraordinary control over the abrasion process. Equally rare objects have been found from Shandong 山東 to Hubei 湖北 provinces, suggesting active trade and cultural exchange occurred along China’s rivers during the second millennium BCE.

The face of this ornament resembles the relief versions on the chisel (F1915.87) and appliqué (F1939.54) to the right, but it lacks their more complex outline. The smooth, flat sides of the head and neck may, in fact, have been refinished in ancient or, more likely, recent times. Several generations of owners might have drilled the complex system of holes on the back to accommodate their different ways of using this jade.

Behind the Mask
These three late Neolithic jades continue the Liangzhu practice of distinguishing special objects by decorating them with humanlike masks. Different from earlier examples, however, the motifs on the chisel (left) and appliqué (right) use delicate raised lines to define contours and interior details, such as eye sockets and nostrils. This decorative approach required extraordinary control over the abrasion process. Similar objects have been found hundreds of miles apart, from Shandong to Hubei provinces. This suggests China’s rivers were busy routes for cultural exchange during the second millennium BCE.

A roughly triangular piece of jade is worked into a sculptural depiction of a head with features much like S1987.880--a large round nose, bulging eyeballs, and circular earrings at the ears. The headdress, almost flat at the top, also dips to a point at the forehead. Instead of the fangs on the other examples from this group, the broad mouth shows thick lips and neat rows of teeth, like the image on the tablet F1915.87. The sides of the head describe a straight line. There are no hooked scrolls extending out, but an "H"-scroll executed in thin relief reaches down on either side of the ears like sideburns. The base of the neck also ends in a smooth convex curve, accented by a large incised scroll in the center, like a bowtie.

Unlike S1987.880, the surface and details on its face are in near-pristine condition. Its fine-grained pale greenish-yellow material is closely comparable to many examples in the group, their surfaces also virtually unaltered only along the edges (LTS1985.1.276.1). [1] However, the somewhat neat silhouette on the sides and at the base of the neck, as well as the rather awkward "bowtie" at the neck, suggest that damage to these (perhaps altered) areas might have been refinished and the entire piece re-polished to its current condition.

The back shows a complex system of perforations. A large hole pierces the head in the center from top to bottom. One set of linked tunnel-like drillings appears at the top corners and immediately below it on the back. Another set runs vertically down the middle of the back. These are all invisible from the front. The only perforations visible from the front are the two on the edge, at the level of the eyes. They are also drilled from both sides. The need for this many perforations on a single piece is not clear. Most other examples of this type have only a single perforation from top to bottom (S1987.880) or mere cylindrical drillings that do not connect (fig. 1). Like its pristine finish and the neat silhouette, these additional drillings also suggest efforts at adapting the piece for different use in subsequent times. Perhaps it is these modifications, robbing the piece of its original character, which caused Dohrenwend to remark that it "lacks something of the magical character" of the others in the group. [2]

[2] Doris J. Dohrenwend, "Jade Demonic Images from Early China," Ars Orientalis 10 (1975), p. 64. A more extreme suggestion would be that the entire piece is a recent copy of one of the known examples. The almost extravagant system of perforations on the back, however, does not support this possibility. They have a quality of unplanned additions to adapt an existing object to new uses. The uncertainty about this head may have contributed to scholars' hesitation in using it in their discussions. 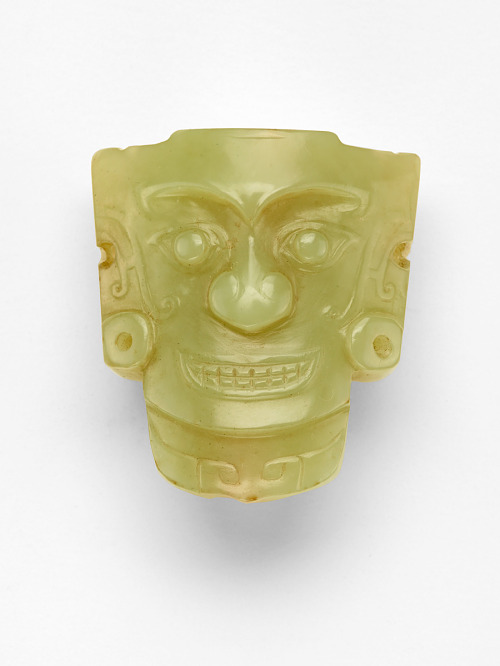