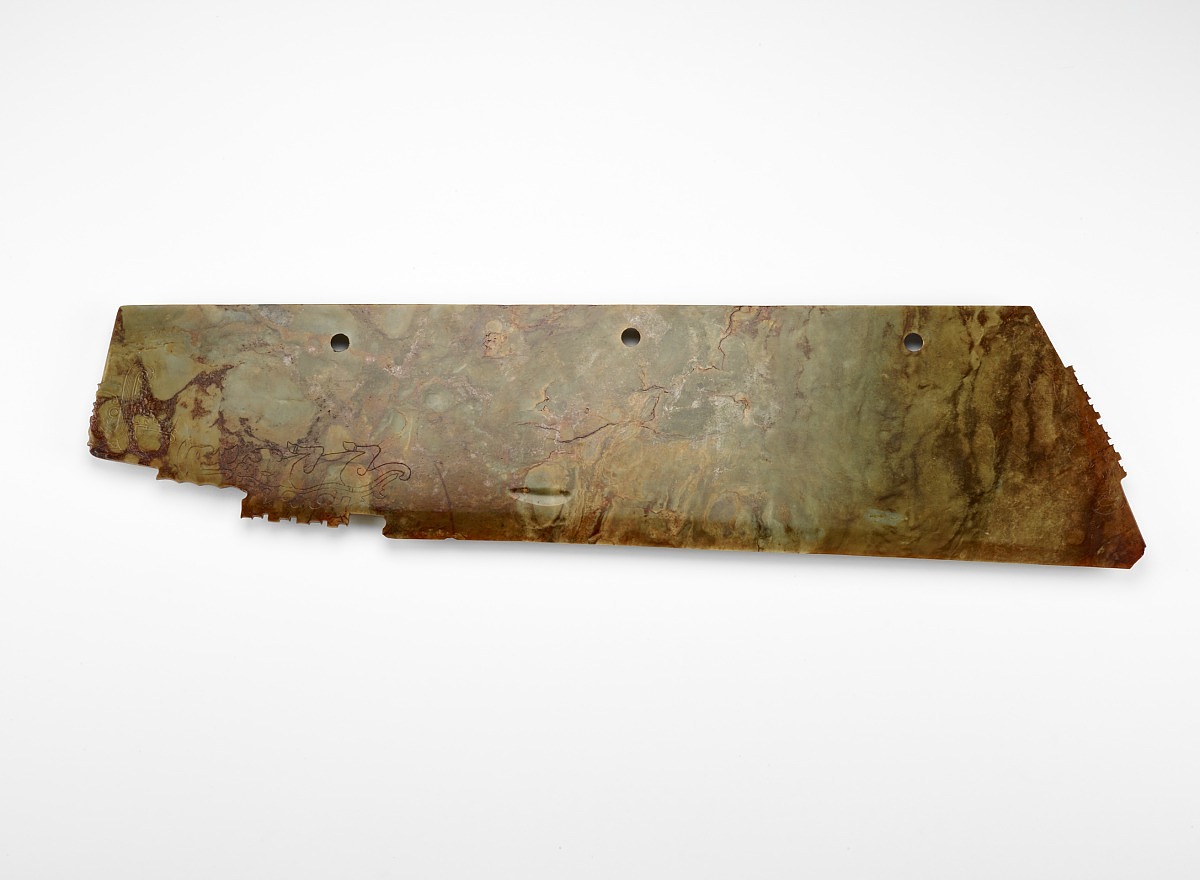 [1] According to Curatorial Remark 2 in the object record.

The exceptional finish and size of this knife suggests its important ritual status. Among the surface ornaments, only the head, seen upside down in profile with long curled hair and a feathered headdress, is contemporary with the blade. The animal figures, crudely executed by incised lines, were added much later.

This monumental blade is one of the largest ancient Chinese jades in the world. Although it is too large and heavy to be of practical use in harvesting crops, its shape is loosely based on much smaller stone harvesting knives (F1979.39) that would have been fastened to wooden handles. Made for display, this ceremonial version has an abstract geometric form with a line of precisely spaced holes that probably served no practical purpose but were copied from humble stone knifes (F1979.39) to enhance the design. The broad expanse of mottled colors and the exceptionally thin "cutting" edge make this a remarkable demonstration of the craftsman's skill in working with jade.

Despite its current impressive size, this blade was once much larger. At one time, both the left and right edges looked identical. Judging from the way the broken blade was refinished, the uneven serrated edge at the lower right is not original. Based upon the style of the human face shown in profile upside down at the right end of the blade, it broke shortly after it was first created in the late Neolithic period. This face, so different from the earlier mask motifs on Liangzhu 良渚 jewelry and cong 琮, can be traced to the Longshan 龍山 culture that occupied northern sites from Shandong 山東 to Shaanxi 陝西. Other changes to the surface, such as a long inscription and outline drawings, are more recent additions.

Viceroy Duanfang
When Charles Lang Freer bought this massive blade, it came in a fitted hardwood box. An inscribed panel made of burl wood stated it had been owned by Duanfang (1861–1911), the last viceroy of imperial China. Freer viewed Duanfang’s collection in China in 1909 and again in 1910. He praised the viceroy’s antiquities as being the finest in all of China.

Shortly after Freer’s second visit, Duanfang was beheaded by his own rebellious troops during the opening weeks of the Chinese Revolution. After his assassination, Duanfang’s family sold off his vast collection. Freer’s association with Duanfang and his family allowed him to acquire scores of important objects, including this blade and many of the other fine jades in this room.

Designed to Impress
This monumental blade is one of the largest ancient Chinese jades in the world. Too large and heavy to be of practical use in harvesting crops, its shape is loosely based on stone harvesting knives fastened to wooden handles. The line of precisely spaced holes probably served no practical purpose but was copied from humble stone knives to enhance the design. The broad expanse of mottled colors and the exceptionally thin “cutting” edge make this a remarkable demonstration of the craftsman’s skill in working with jade.

Originally this blade was even larger, and its left and right ends had symmetrical angles and identical decoration. After the right end was broken, its raw edges were redecorated, and a profile of a human head was added. (Why it is oriented upside down remains a mystery.) Since this new, finely finished ornamentation also dates to the late Neolithic period, the breakage and redecoration must have happened shortly after the blade was first created. 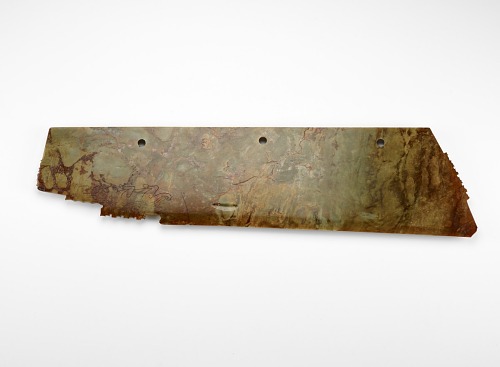