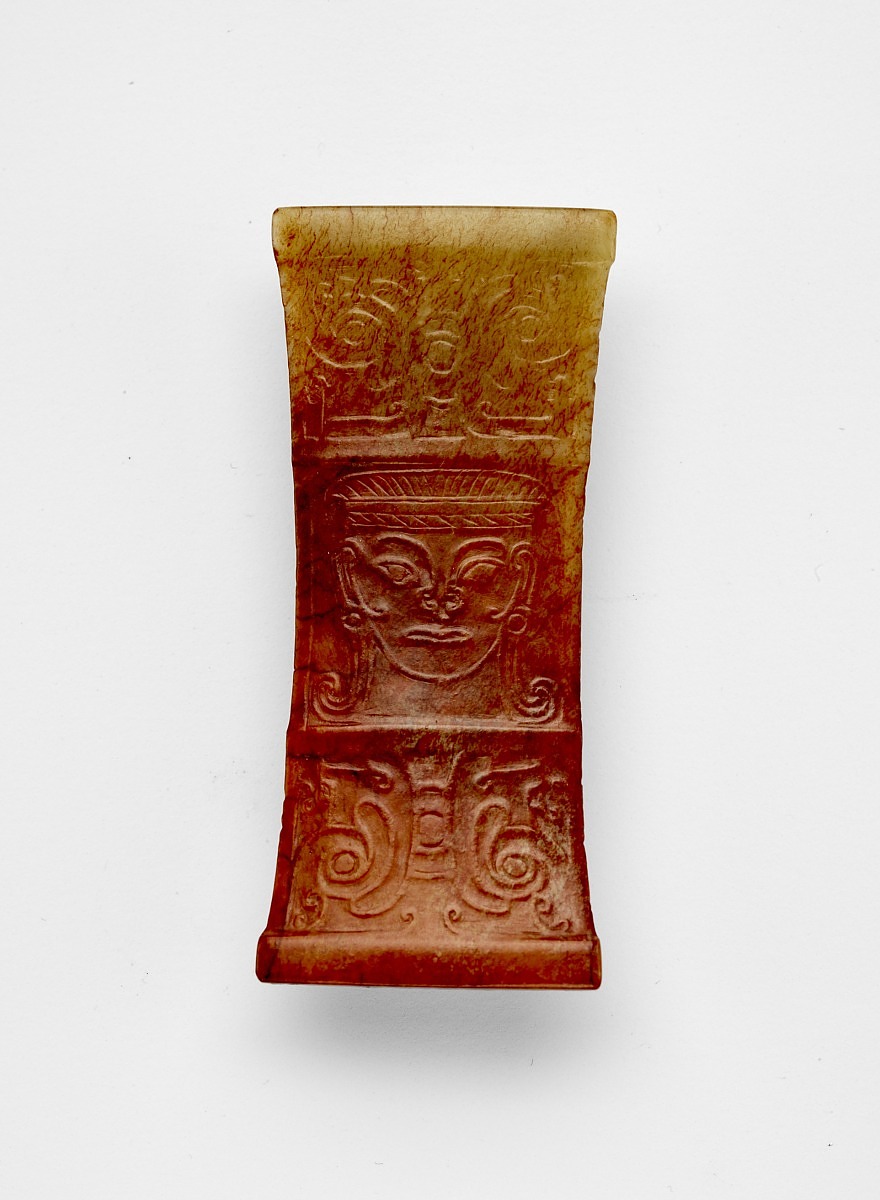 [2] See C. T. Loo's stockcard no. LAP 5655: "Brownish jade in the form of a thin pillar, head etched in center. Han," C. T. Loo & Frank Caro Archive, Musée Guimet, Paris, copy in object file. According to information on the stockcard, the object was shipped to Paris in March 1937 and returned to New York in November 1938; in September 1939 it was offered to Mr. McKim; on November 6, 1939 it was shipped to the Freer Gallery.

This thin and delicately worked plaque was probably sewn onto a fabric headdress or garment through four small holes behind the corners. The naturalistic image of a human face forms a striking contrast with the two highly stylized designs above and below it.

These three late Neolithic jades continue the Liangzhu 良渚 practice of distinguishing special objects by decorating them with masks that sometimes include human features. Unlike earlier examples, however, the motifs on the chisel (F1915.87) and appliqué (F1939.54) are executed in very fine relief lines that define contours as well as interior details. This decorative approach required extraordinary control over the abrasion process. Equally rare objects have been found from Shangdong 山東 to Hubei 湖北 provinces, suggesting active trade and cultural exchange occurred along China’s rivers during the second millennium BCE.

Exceptional workmanship defines this human face wearing a twisted rope or fabric headband. His long hair ends in upturned curls, and circular earrings hang from his ears. Four sets of tiny drilled holes presumably were used to fasten this ornament to fabric. Creating those holes required precise control and tiny drill points, a noteworthy achievement of the Shijiahe 石家河 culture.

Behind the Mask
These three late Neolithic jades continue the Liangzhu practice of distinguishing special objects by decorating them with humanlike masks. Different from earlier examples, however, the motifs on the chisel (left) and appliqué (right) use delicate raised lines to define contours and interior details, such as eye sockets and nostrils. This decorative approach required extraordinary control over the abrasion process. Similar objects have been found hundreds of miles apart, from Shandong to Hubei provinces. This suggests China’s rivers were busy routes for cultural exchange during the second millennium BCE.

The outline of this small plaque flares gently toward the flat top and bottom. Its slightly convex front is divided into three equal sections. Symmetrical configurations of two large scrolls--suggesting eyes--occupy the center, with smaller scrolls and hooks filling the remaining ground. Both configurations face the middle register occupied by the image of a human head. This human face is different from the others discussed in the foregoing entries. Its features are plainly human, although somewhat expressionless. It wears a twisted rope or fabric headband at the forehead, forcing the hair to rise up behind it in a low bank. Long tresses extend beyond the chin-line to end in neat upturned curls. Circular earrings hang from the ears at the sides. These three motifs are separately by low raised bands, which also define the top and bottom. Four sets of diminutive connected holes pierce the slightly thicker corners, presumably for fastening it to a backing without showing in front. The back is plain but smoothly finished. To date, it remains a unique specimen both in shape and in its unusual combination of motifs.

The workmanship of this small ornament is among the finest known. All motifs are executed in thin relief lines. The drilling of the four sets of holes on the back required precise control and near micro-sized drill points. The finish is smooth and lustrous, enhanced by discoloration due to prolonged handling.

This overtly human image belongs to a separate category from the more ornate and semi-human faces discussed in connection with S1987.880. A frontal image on the tablet F1915.87 and a profile version on one edge of the large knife F1918.1.1 in these collections might be considered a part of this second, more realistic category. Similarly realistic renditions of human images wearing long curled hair, circular earrings, and sometimes twisted headbands, seen en face or in profile, are found on a number of well-known jades in the Palace Museum in Beijing 北京, Cernuschi Museum in Paris, the Shanghai 上海 Museum, and the Hotung collection in London (fig. 1a-d). None has yet appeared among artifacts from contemporaneous excavated contexts. [1] On all these examples, the consistency of this image is striking. It implies a well-established iconography based on existing traditions that inform its particular characteristics. Exactly what these traditions are or what the human images mean, [2] and how they relate to the other traditions that spawned the semi-human images, are as yet unclear.

The symmetrical scroll designs on top and bottom closely resembles those incised on an adze recovered from late Neolithic contexts at Rizhao 日照, Shangdong 山東 province (fig. 2). [3] Except for this surface find, most other motifs of this type are only seen on unprovenanced specimens in Chinese and Western collections (see S1987.880, F1939.54). [4] In the case of these scrolled designs, as in semi-human image, the scant archaeological material is not enough to help us understand its origin or distribution. [5]

The uniqueness of this example, the lack of known archaeological parallels, its unusual combination of motifs, and the clear but perplexing links with the other, larger group of jade semi-human images represented by S1987.880 contribute to the mystery that continues to surround it.

[5] In an earlier article (Jenny F. So, "A Hongshan Jade Pendant in the Freer Gallery of Art," Orientations 24, no. 5 [1993], 87--92), this author suggested possible connections between Shandong 山東 and Liaoning 遼寧 provinces in the northeast evident in the similarities between both the scrolled designs and that on the Hongshan 紅山 plaque (F1991.52), and the blankly staring human image with the mud image from the "Goddess Temple" site at Niuheliang 牛河梁. Since further archaeological data have not been available, this must remain conjectural. 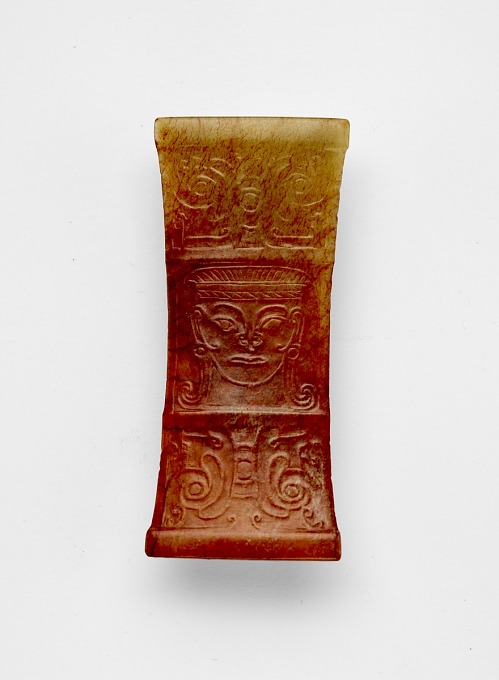