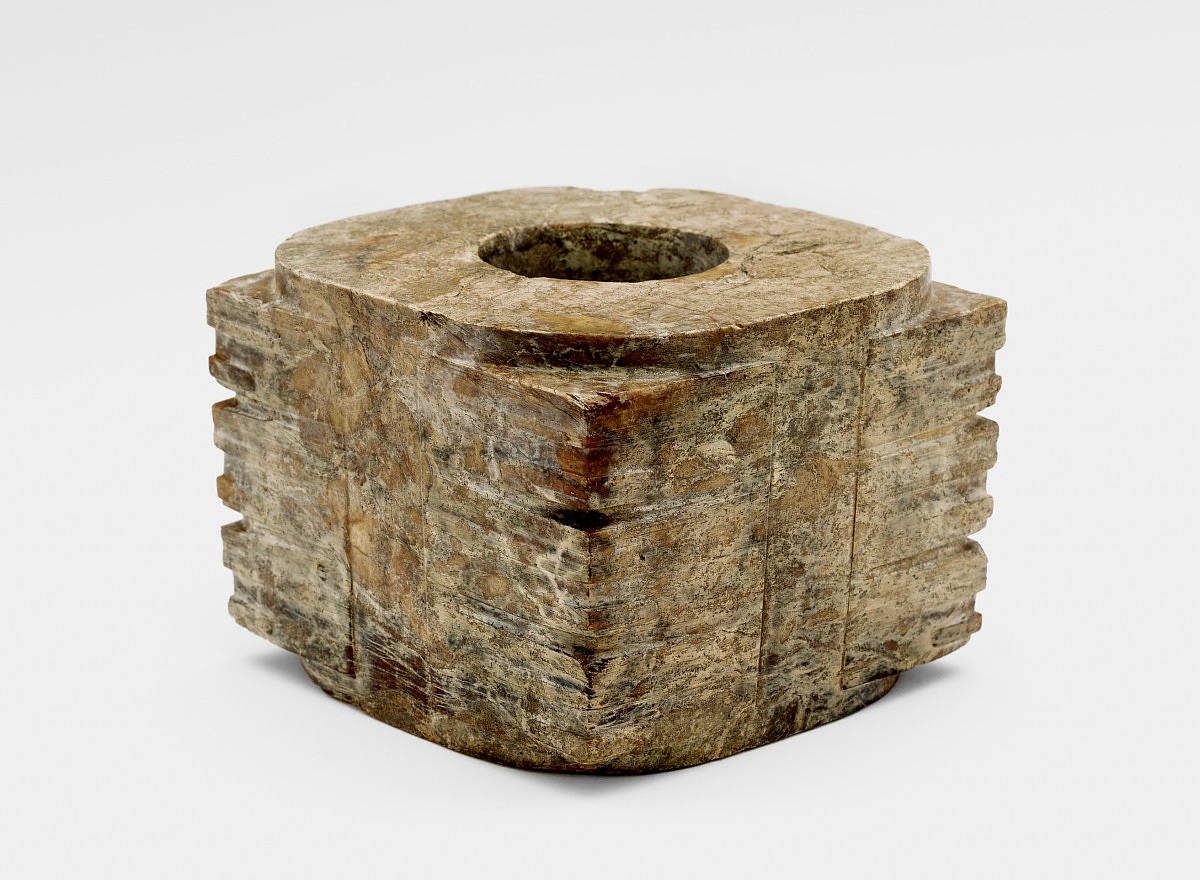 Acquired with a box and stand.

Archaic jade ts'ung [cong] 琮 are among the most enigmatic of all early ritual objects. While there is no certainty about their original function, they are traditionally regarded as being symbolic of earth.

Both of these jade ts'ung [cong] 琮 were acquired by Charles Lang Freer as examples dating from the Chou [Zhou] 周 (1027–222 BCE) or Han 漢 (206 BCE–CE 220) dynasty. Recent archaeological finds support a considerably earlier date for this type of ts'ung [cong] 琮, and they are now accepted as characteristic examples of the late Neolithic period made in southeastern China.

During the Ch'ing [Qing] 清 dynasty there was a revival of interest in archaic forms, and potters used the ancient jade shapes as prototypes for porcelain and stoneware vases. In the later ceramic versions, like the two vases shown in this same case (F1907.44, F1911.348), the original ritual function of the jade ts'ung [cong] 琮 has been replaced by purely secular concerns.

These jade cong 琮 tubes with a square cross-section bored with a central hole are now considered an innovation of the Liangzhu 良渚 culture. Cong 琮 come in a great variety of sizes and are frequently found in Liangzhu 良渚 tombs, sometimes arranged with other jades in a circle around the body. The original meaning and function of these ritual forms remain unknown. Many of the earliest and most carefully finished examples (the result of months of laborious shaping by hand) are comparatively compact; their rounded shapes suggest the form evolved from bracelets. On two of the cong 琮 here (F1916.118, F1917.384), the haunting mask design—with its bar-shaped mouth, raised oval eyes, sunken round pupils, and two bands that might indicate a headdress—resembles the motif seen on Liangzhu 良渚 jewelry.

Much larger cong 琮, which are frequently made of lower-quality nephrite, emphasize impressive scale over meticulous workmanship. They have flatter sides, sharply angled corners, and squared collars at top and bottom—all indications that less time and attention were paid in shaping a rectangular block of jade. Simplified mask motifs on these cong 琮 would have been easier to produce as well. Such shifts might be associated with changing attitudes towards ritual objects that were intended for burial.

The cong 琮 form continued in use long after the Liangzhu 良渚 culture flourished, but later Neolithic and Bronze Age examples (such as F1917.41, F1919.51) are typically smaller and undecorated, suggesting their diminished importance in burial rituals.

Museum founder Charles Lang Freer acquired these cong 琮 largely for their aesthetic appeal: he simply liked the way they look. Freer was attracted to their intriguing shapes, smooth surfaces, and mottled colors. A century ago, when these cong 琮 appeared on the international art market, little was known about their historical, cultural, or archaeological significance. Today these mysterious tubes, along with most of the other objects in this room, are recognized as being among the most important jades from the Liangzhu 良渚 culture now outside China.

What Was It For?
An innovation of the Liangzhu culture, these jade cong (pronounced tsung) tubes are the result of months of laborious shaping by hand. Various sizes are found in Liangzhu tombs, sometimes arranged with other jades in a circle around the body. While their original meaning and function remain unknown, the circular shape of many early examples suggests the form evolved from bracelets. Look for a haunting mask design, with a bar-shaped mouth, raised oval eyes, and sunken round pupils.

This example is unusually large, massive, and heavy. The collar stands relatively low above the corners. An identical human face motif occupies each of the three tiers, all very crudely incised, with only a single circle for eyes, some no longer visible (or perhaps never executed?) The coarse and variegated texture of the material might in part be responsible for the simple designs and crude execution, since the rock's coarse texture impedes proper execution of fine designs.

There is a near-identical, massive example in the Sonnenschein collection at the Art Institute of Chicago (Fig. 1), also made from a comparably coarse and eroded material, with similarly crude workmanship. The exterior of the Sonnenschein cong 琮 has discolored to amber and tan (much like the Freer's), but the surface visible inside the opening shows a near pristine unaltered green.[1] It is possible that its fresh surface inside the opening is due to its subsequent enlargement. The opening on the Freer cong 琮 is much smaller, and does not display any color difference.

An interesting feature of this cong 琮 is its odd-numbered tiers. From a practical point of view, even-numbered sections would be easier to obtain along a given length through repeated divisions into halves (see S1987.887).[2] Odd numbered sections require prior layout of all sections, perhaps with some sort of measuring device that allows relatively even division among the sections. It was these mathematically more demanding, odd-numbered tiers that seem to have been made most often (see F1917.95, S1987.468) and into the most impressive tallest examples (F1916.410).[3] Like the choice of human and animal faces, there must have been compelling religious or spiritual reasons behind this practice that is lost to us today.

Few cong 琮 are this massive and large. Their size precludes their function as bracelets. Only a small handful of cong 琮 of comparable size have been recovered from excavated contexts. One from M12 at Fanshan 反山 can be taken to represent the epitome of the best and most complex of Liangzhu 良渚 products (Fig. 2). It is the largest known, at about 17.1--17.6 centimeters wide with an unusually small opening at a mere 4.9 centimeters. A second example is slightly smaller than the Freer cong 琮.[4] Both Yaoshan 瑤山 examples were made from the same fine-grained, opaque, milky-white material and exquisitely worked to show two superposed tiers of a human image with feathered headdress and arms hugging an animal image with clawed limbs. The larger cong 琮 has additional birds at the corners and the same man-animal combinations on the median axes on each side, altogether presenting by far the most elaborate d&‌eacute;cor scheme known on any Liangzhu 良渚 jade. However, more closely related to the current example in its coarse material, workmanship, and human face design is a large cong 琮 from Sidun 寺墩, Jiangsu 江蘇 province.[5] It is possible that the Freer example came from a similar geographical and chronological context like that at Sidun 寺墩.[6]

Figures:
Fig. 1. A cong 琮 in the Lucy Maud Buckingham Collection at the Art Institute of Chicago (1926.2029) shows a difference in color between the outer walls and the drilled core. http://www.artic.edu/aic/collections/artwork/33098?search_no=1&index=0 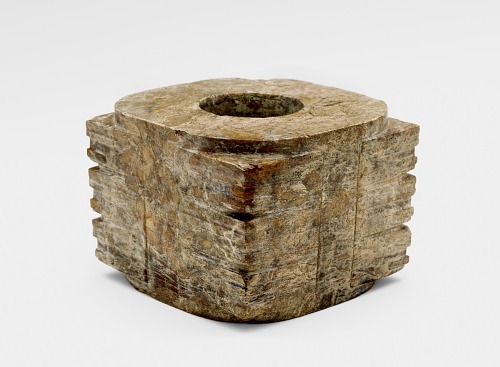