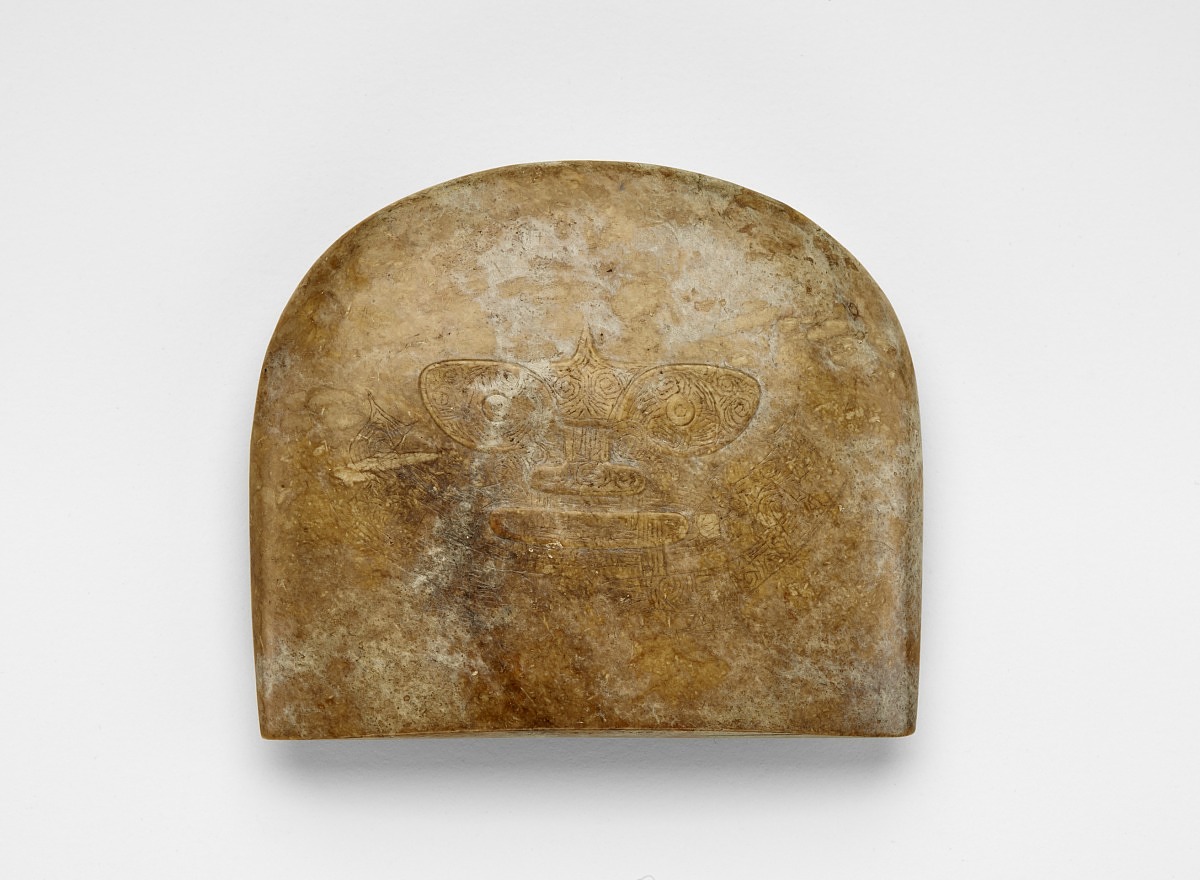 [1] According to Curatorial Remark 10, Julia K. Murray, 1982, in the object record "A review of the Original Miscellaneous List shows that this object was excavated in Hsiaki [Xiaxi] 下溪, Chekiang [Zhejiang] 浙江."

Acquired with a box.

Ornaments like this usually occur in sets of four, probably forming the front, back, and side panels of an elaborate headdress. The presence of the mask motif suggests that they were worn by leaders of the religious community.

Since the earliest of times, jade was treasured as a material of status in China. This rare and beautifully colored stone was transformed into bracelets, pendants, head ornaments, and other forms of jewelry. Some of the examples found in Liangzhu 良渚 culture tombs must have played a ritual function, for many pieces bear a mask motif that is also commonly found on objects surely created for ceremonies and burial rites. Variations of this design are seen on two of the four arched plaques shown here (F1916.511 and F1917.380), while a more geometric treatment appears on the tall cuff bracelet (F1919.46). The surface surrounding the masks was meticulously ground away to emphasize the large eyes and oblong mouth in relief. Found only in the richest of Liangzhu 良渚 tombs, such decorated jade plaques were probably attached to headdresses. The pairs of holes on the back may have allowed them to be sewn to cloth turbans worn by the deceased.

Previous owners cleaned and repeatedly handled these jades, which were possibly unearthed centuries ago, and over time the fine surface details were obscured and the color and translucency of the natural stone dulled.

Status Symbols
Special bracelets, pendants, and head ornaments found in tombs must have played a ritual function in the lives of the Liangzhu people. A mask motif is commonly found on objects created for ceremonies and burial rites. Examples seen here emphasize the large eyes and oblong mouth in relief that were created by laboriously grinding away the surrounding background. Decorated jade plaques with a rounded top like these have been discovered near skulls in tombs. Pairs of holes on the back suggest the plaques were once sewn to a leather or cloth headdress worn by the deceased.

These lunette shaped plaques are not flat. Their backs are gently concave to match the subtle  convexity of the front. The flat bottom also curves up slightly. On the back, three sets of linked holes placed  in triangular configuration--one near the rounded top, and one each near the corners at the bottom--were  drilled for attachment.

On the larger plaque (F1916.511), the front shows an animal image identical to those found on many  Liangzhu 良渚 cong 琮 (see F1916.118): large pointed oval eyes with circular pupils, a pointed connection between  them on the forehead, over an elongated oval nose and an even longer oval mouth. All this is done in very  low relief, with their interior surfaces densely filled by miniscule geometric patterns incised in superfine lines,  much of them now worn beyond recognition. Incised and extending from either side of this image are  arm like appendages that bend forward to meet in claws just below the mouth. These are also filled with the same minute geometric patterns. On the smaller plaque (F1917.380), the animal image is surmounted by a  human image wearing a feathered headdress resembling motifs found on the renowned large cong 琮 from Fanshan 反山 (M12:98), [1] but the designs on the Freer piece are so worn (especially  the human image) that they are barely visible.  Two related plaques acquired at the same time as the smaller plaque (F1917.380) in 1917 are  undecorated (F1917.378c and F1917.378d).

The Metropolitan Museum of Art, New York, has a virtually identical plaque that  may conceivably have come from the same set. [2] Recent excavations of Liangzhu 良渚 sites in Zhejiang 浙江 province  reveal that these ornaments usually occur in sets of four, and only in the richest tombs in the Yuhang 餘杭 area.  Four of five sets recovered came from graves at Fanshan 反山; the remaining set was recovered from looters of  M12 at Yaoshan 瑤山. [3] Of the five sets recovered, only one set (from M22 at Fanshan 反山) is decorated with a  face like design like the Freer's. [4] The rest are plain like F1917.378c and F1917.378d. Based on the relationship of the  plaques in M12 at Yaoshan 瑤山, archaeologists suggested that the sets were sewn on as ornaments on cloth  headdresses worn by the deceased. Since these plaques have so far only come from Liangzhu 良渚 graves, they  are regarded as unique to the Liangzhu 良渚 people. Their rarity signifies unusual status for their owners. The sets decorated with animal images like the Freer's probably enjoyed even higher status as they might also  indicate that the wearer possessed special powers implied by the image of the creature that adorns it.

It is therefore interesting to note that on rare occasions, for example at M74 in Fuquanshan 福泉山 outside  Shanghai 上海, only a single plaque has been recovered from a grave, and often together with jade beads. M22 at  Fanshan 反山 also yielded a single plaque, again with beads. [5] Both plaques have two additional holes  drilled from back to front at the bottom so that it can be strung with beads to form a necklace. This suggests  that after their manufacture, the sets of four might have been separated--given away as gifts or forcibly taken from  their owners under unknown circumstances. Their new function in new contexts would then have resulted in  the new drillings.

[2] Rogers Fund, acc. no. 18.63. Acquired in 1918 from Tonying and Company, in New York, closely comparable in  size, and showing a similarly worn opaque yellowish tan surface, the Metropolitan plaque might have been  part of a set with F1916.511 separated and sold individually as dealers often did without fully  comprehending the meaning and the functions of such object sets. A third example is in the Pillsbury collection,  Minneapolis Institute of Arts (acc. no. 50.46.230). Its design shows the creature surmounted by a  humanoid head wearing a feathered headdress similar to the design on the large cong 琮 from Fanshan 反山 (M12:98), but lacking arms or legs. 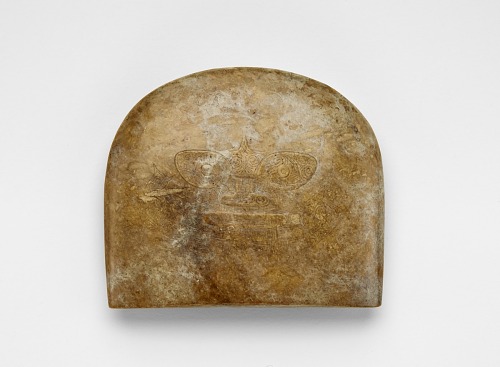